Dialysis at the Root of Bioethics 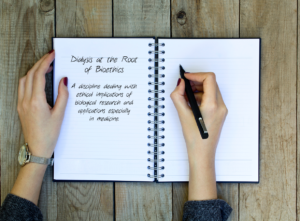 A discipline dealing with ethical implications of biological research and applications especially in medicine.
According to the Merriam-Webster dictionary, the term bioethics was first used in 1970. You may be surprised to learn that the introduction of dialysis was one of the reasons the term bioethics came about.
In 1962 the first outpatient hemodialysis was opened in Washington state. A far cry from the clinics we know today, the facility had only 3 dialysis beds and treatments were done overnight, twice weekly. Space was limited and insurance coverage for outpatient dialysis did not exist at that time. This meant access to a lifesaving treatment such as of dialysis was very limited.
Starting out, 30 people applied to receive dialysis treatment at the outpatient facility. But how would they decide which applicants received treatment?

The answer was a two-step process.

During the first year the clinic was opened, the 30 applicants were reviewed, 17 were deemed suitable for dialysis, 10 actually went on to receive dialysis and the remaining 7 passed away.
This raised several questions about the ethics of essentially deciding who would get access to treatment, providing them with an opportunity to live and who would be left to die due to their condition. These ethical concerns were especially valid given the fact that the Admission and Policy Committee chose dialysis candidates based on what they called “social worth.” This assessment evaluated candidates based on age, sex, marital status, number of dependents, income, net worth, emotional stability, education, occupation, and potential for future societal contributions.

Luckily, dialysis and healthcare has come a long way in large part due to people questioning and criticizing the ethics of the first outpatient dialysis treatments. While ethical dilemmas still exist in healthcare, the process for navigating these situations has been refined and is continually reevaluated to meet the demands of healthcare today.
For example, this evolution is reflected in the Academy of Nutrition and Dietetics Code of Ethics, which is revised and updated regularly, most recently in 2018.

To learn more about ethical practices for dietitians, check out the Academy of Nutrition and Dietetics page on ethics resources: